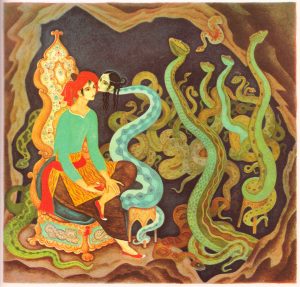 In Night 1 of my musings on the connections between the ancient novels and the Arabian Nights, I looked particularly at the story of Budur and Kumar, and how its narrative resembles ancient Greek narrative. Today I would like to continue by focusing on another of the tales from the Nights, about Yamilka Queen of the Serpents. In this story, a young woodcutter called Hasib, son of a Greek sage named Daniel, is abandoned in a forest by his (alleged) friends and meets the Queen of the Serpents, who tells her own tale (and several other inset stories) involving a society of apes, a magic ring, and human-animal hybrids.

A recent article by Richard van Leeuwen has suggested that there may be some overlap between this story and Iamblichus’ Babyloniaka, the fragmentary novel preserved primarily in a summary of the ninth-century patriarch Photius, an allusion which may be present even in the echo of Iamblichus in the name of the titular Yamilka.[1] But what’s most striking about both texts is the way they position themselves on the literary and geographical map. Iamblichus’ Babyloniaka is a text explicitly set on the very fringes of the Roman empire at its height – the very title ‘Babylonian Things’ aligns it with the ancient city of Babylon, itself a relic of a former age by the time of the novel. Although the geography of the novel is fuzzy, at least in Photius’ summary, it seems clear that the Babyloniaka was set entirely beyond the boundaries of the Roman Empire, in an exoticised and orientalised landscape, with virtually no Greek characters. As Helen Morales put it, ‘it is far from clear where to locate Greece in this ‘Greek novel’’.[2] This combination of Greek novel and non-Greek setting draws attention to the limitations of what a Greek novel can and should be, as well as the implied perspective of its audiences. In other words, the Babyloniaka uses its non-Greek setting to explore what Greekness means, both within the narrative and for its external readers.

You will never guess what happens next

The Yamilka narrative draws attention to similar questions, albeit in a different way. The whole tale involves an elaborate structure of inset narratives, analogous to the nesting-doll architecture of David Mitchell’s 2004 novel Cloud Atlas. But what’s notable here is how the levels of narration also correspond with the narrative’s movement across geographical spaces and into fantastical ones. As the inset narratives become more and more elaborate, the spaces they describe become correspondingly exoticised, with lots of human-animal hybrids, unreal landscapes, and bodies which split in half at the waist to go in different directions. Despite these surreal stories (and the fact that the narrator is half-woman, half-snake), we are told that Yamilka tells these stories in Greek to her audience, the son of a Greek doctor. Just as Iamblichus’ Greek novel challenges that designation through its entirely non-Greek setting, the Yamilka narrative explicitly frames itself through a Greek lens which becomes a foil to the wackier and weirder places visited in the course of the narrative. This isn’t to say there is any connection between the two texts, but rather the dialogue between them illuminates the wider issues: they both tackle the familiar and strange, recognisable and defamiliarizing, and invite us as readers to consider where we stand within these contextual frameworks. 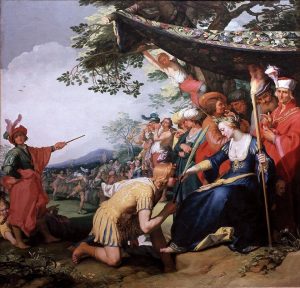 Even just from these brief snapshots of the broader mosaic which is the Nights, it’s clear that these narratives offer a number of points of connection with the Greek novel, but nothing like conclusive proof of a relationship between the two. The themes treated in both texts, such as erotic desire, gender roles, and travel into fantastical lands are so general as to testify more to universal themes in narrative rather than a specific relationship between these two corpora. After all, it’s clear that given the diversity of traditions which underlie both the ancient Greek novel and the One Thousand and One Nights there doesn’t need to be a direct relationship between the two for them to engage with similar motifs and concerns.

But we can do more with this ambiguity. As already mentioned in Night 1, the Nights feature in histories of the novel dating back to the sixteenth century, where they become an intermediary between the ancient novel and its early modern counterpart. Why has this potential connection proved so enduring? Do we want to see connections between the two because of our own vested interests in ideas about novels? Tomas Hägg has proposed that the so-called ‘sophistic’ novels (Achilles Tatius’ Leucippe and Clitophon and Heliodorus’ Aithiopika in particular) are more visible in so-called Western reception histories, whereas the parallel ‘pre-sophistic’ novels more so in Eastern ones (the reception of Metoichus and Parthenope in particular).[3] This is certainly possible – but could this be simply a trick of the light? The sophistic/pre-sophistic distinction has increasingly fallen out of fashion in novelistic scholarship, as it implies a discrepancy between sophisticated and unsophisticated narratives which isn’t borne out by the actual texts. While Chariton’s Callirhoe and Xenophon of Ephesus’ Ephesiaka are linguistically more simple than Heliodorus’ complex and allusive Greek, recent scholarship has done much to establish their literary stylishness and sophisticated narrative design.[4] There’s a danger here of falling prey to a convenient narrative, in which our own perceptions of the narrative and intellectual worth of the novels become evidence for their circulation.

it’s not what is outside, but what’s inside that counts

At its core, these issues force us to confront the limitations of the Greek novel, as well as our own vested interests and priorities as readers. The difficulties in defining the ancient novel and the utility of the term given the many ways the corpus differs from its modern counterpart have long been debated, and there are no easy answers to these questions.[5] But considering works such as the Greek novel against a text like the Nights compels us to consider just how fragile these connections are. What sort of evidence would prove links between texts as different as these? Are we looking for specific references – word-for-word quotations, exact imitations, of specific scenes? Or are we looking for common motifs and themes – and if so, how close do they need to be? What’s at stake here is how much vested interest we have in our ideas of novels and fiction, and what value we’re willing to place on a connection, no matter how tenuous. In other words, by exploring a text such as the Nights from the perspective of ancient novelistic fiction, what we’re forced to confront is not how the two are connected, but how we would be able to tell, and what methodologies can be sustained.

Consequently, what we’ve been doing in our reading group is not to prove that there is a conclusive intertextual connection between the Nights and the ancient novel – that likely can never be proved beyond a doubt. Instead, what’s become clear in our reading is how the Nights forces us to think differently both about the ancient novel and the vicissitudes and methodologies of its reception. Perhaps the most important point which emerges from this reading is not about the relationship between the two, but how our assumptions of a relationship changes our own perspective, as it risks over-simplifying the contexts, genre, literary sophistication, and wider cultural influences of both the Nights and the Greek novel. By reading the two in dialogue but not necessarily in a linear relationship of direct influence, we can better understand how a text such as the Nights challenges our preconceptions about novels and novelistic reception, and think more critically about how to trace these links between cultures, texts, and fictions.