May you live in interesting times

After months of living in the new normal, I feel that my tempo has decreased. Focus has shifted as society has closed down. From an endless chase for productivity, protecting people from the virus appears as the new main objective. In the blink of an eye everything has changed: habits, priorities, and tempo. In this new normal, I send neatly sown facemasks to my parents back home, hoping that my sign of affection could not only make them happy and cut our geographical distance, but also keep them safe. In the new normal, I grasp for ways of managing an unmanageable situation. I turn my days of orientation into my normal. Through my purchase of these – to me new – pieces of clothing, I’m seeking for my place in a world I don’t know.

Collectively, we’re living in a state of uncertainty. Critically, we analyze our ways of living, calling out destructive habits, opening our minds to something new. In these so-called strange times, moreover, political movement is discernable in many places of the world. Anger and determination enact change in existing social structures and physical public spaces. In the new normal, it seems, things can actually change. Stores are closed down, statues are taken down. How will we move on from these days of uncertainty? What will take shape from the new normal?

In this blogpost I would like to reason that the experience of uncertainty carries an inherent potential, by exploring some passages from Xenophon of Ephesus’ ancient Greek novel An Ephesian Tale. This novel is dated to the first or second century CE and is, together with Chariton’s one, among the earliest of the ancient Greek novels. In the next few paragraphs, I want to explore the state of uncertainty in which the female protagonist, Anthia, finds herself after she falls in love with the male protagonist, Habrocomes. Maybe the lack of place for female desire, as it is expressed by Anthia as she finds her emotions unfitting a young girl, is echoed in a current collective experience of uncertainty? 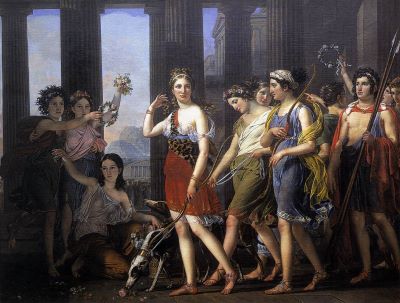 “I feel a new pain!”
The story of Habrocomes and Anthia falling in love plays out differently for both. Habrocomes, for his part, is immature in the beginning of the story, unaware of his own sexuality. As he sees Anthia at the local festival of Artemis, Habrocomes falls instantly in love with her and subjugates – finally – to Eros. His desire is constructive, turning him into a civilized man through the act of transgression. Having exposed a naïve boyish arrogance towards erotic desire, he now discovers eros through his love for Anthia, and grows up. In this sense, Habrocomes’ desire results in the opposite of uncertainty.

Anthia’s story is different. She is introduced in the story during a local festival of Artemis. Her introduction is focused around her beauty and resemblance to the maiden huntress, the goddess of chastity, Artemis. In her introduction, Anthia is described as aligned with Artemis through the gaze of an observing crowd. Moreover, this perceived link between goddess and mortal girl is described as something which occurs often: Anthia is often seen and greeted as Artemis, the narrative says. In the narrative, her character is developed through the public eye.

When Anthia falls in love with Habrocomes and experiences desire for the first time, her emotions come into conflict with her own, as well as the public, view of her as a young girl, a resemblance of the chaste divinity. She finds herself in a bad state. She asks herself: “What has happened to me?” Anthia is miserable: “I feel a new pain, inappropriate for a young girl. I am mad about Habrocomes.” Anthia does not know what will happen, what is going on: “Where will this desire take me?”
How could we interpret these expressions of uncertainty? To what do they respond? If male characters learn about love as a way to grow up, what space is there for reciprocity, for the female characters to go through an equal transgression? Of course one finds literary representations of women in love in antiquity. The presence of female characters in love is not remarkable in itself. But how is it narrated, and what space is there for it to be acted out? The disruption traceable through Anthia’s words could perhaps be interpreted as the representation of a girl’s experience of dissonance between her bodily emotion and her assigned cultural identity. Anthia is not only in love, but madly so (the verb μαίνομαι mainomai is echoed in the English word ‘manic’); she has lost her senses due to her desire and now finds herself at a loss.

As Anthia expresses the inappropriateness of her emotion, desire is not viewed (by her) as positive in relation to her female chaste identity. However, as for Anthia, when she falls in love with Habrocomes, her body expresses something different from this female ideal of beauty, for which she is admired at the festival. As the crowd sees both the beautiful Anthia and the handsome Habrocomes, they shout that the two would make a nice couple. The awakening of desire is, in other words, instantly placed within a cultural context.

Seeking social identity
Though reciprocity is present in the novel, the connection between love and identity differs, depending on gender. Eros sets Habrocomes on the right track; he is taught to respect and oblige desire. He realizes his own arrogance and begs Eros to be merciful towards the naivety of his ignorant youth. Anthia, for her part, appears to experience herself set off track through her desire. She expresses a shift in her being, wondering what the cause is to her misery. Although Habrocomes’ rite of passage is in clearer line with the genre, Anthia experiences also an internal change caused by desire. This change, she continues, is inappropriate, not fitting a young girl. In Anthia’s first encounter with erotic emotions, a conflict is exposed between the female ideal and her body language, or herself.

An experience of transgression can be discerned in Anthia’s words. Anthia wonders how far her yearning may go, and where she may find an end to her misery. Her beloved one awakens her desire, putting her on the verge between being a civilized girl and a mad lover. Thus, in this scenario, Habrocomes appears to Anthia as a mirror against which she can assert herself – what has happened to me?

In response, Anthia states that she is a virgin under supervision; her social identity prevents her from acting out her emotions. Her social identity stands in the way of the new, uncertain, subject that she is. Although Anthia realizes that her room for agency is limited, she finishes her speech by nonetheless grasping for that which she desires, asking herself: “where will I see Habrocomes?” As a contrast to the scene of her introduction, where focus lied in the public’s gaze on Anthia and her stature in comparison to the goddess Artemis, the narrative now tells the female protagonist’s inner yearning, her bodily emotion, along with an experienced uncertainty. A cultural, ideal female role is put in conflict with Anthia’s inner self.

By experiencing an uncertainty of identification with imposed femininity in culture, Anthia could be interpreted as embodying the potential of a form of (female) subjectivity that is defined in its very lack of definition. Anthia desires Habrocomes, and by her lack of him, she realizes her own limits. She immediately asks herself how to grasp that which she yearns, where she will see her beloved.

Anthia’s uncertainty resonates in our own unpredicted times. Orienting in the new normal we are, in whichever corner of the world we live, faced with new openings. The tempo has slowed down, and still, in the very moment, we are experiencing radical change. In the unknown, we change our habits and priorities. I worry for my beloved ones back home, whom, out of fear of exposing them to a dangerous virus, I mustn’t hug. So I keep strolling in the new normal, sending my father a facemask that suits his rock’n’roll aesthetic. 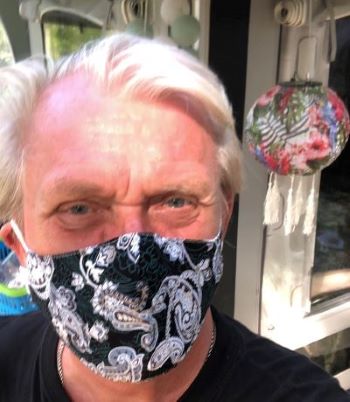 Searching for a path to follow in the unknown, I orient in a world I don’t know. I wouldn’t wish to romanticize neither the time of pandemic nor political reactions against social injustice by suggesting erotic uncertainty is like political and socio-economic uncertainty. The new normal isn’t beautiful, it’s undefined. In the undefined there’s risk, but also potential. Now, my limits are clearer – so I can seek to transgress them. “I feel a new pain”, Anthia exclaims. Yet because of her lack of resonance with the world as she knew it, Anthia finds herself in a state that is yet to be defined. Desire has resulted in a personal crisis, in misery. But then again, through her anguish Anthia reaches herself out, grasping towards that which is yet to be explored.