Much like the protagonists of the ancient Greek novels, cinema and novel fell in love at first sight and lived happily ever after. Oddly enough, though, especially given cinema’s endless interest in depicting the ancient world, only one out of five extant Greek novels made it into film. It’s the 3rd-century pastoral novel Daphnis and Chloe by Longus, which tells the love story of the titular characters, two teenage shepherds with no idea of what love is and what to do about it. Even more disproportionately, it was made into film more than once. I know that the reason for this is the success the novel enjoyed in the modern age as well as the fact that a subject that’s already been filmed stands more chances of being filmed again. I suspect that another part of the reason is that Daphnis and Chloe is incomparably simpler and cheaper to film than the other Greek novels. But it may also be, I think, because in that simplicity lies an attention to viewing that speaks directly to the dynamics of cinema.

There’s an extended scene in Orestis Laskos’ silent film Daphnis and Chloe (1931) in which Lykainion spies on Daphnis and Chloe from a small hilltop (see image on the right), while the young and clueless shepherds are experiencing their relationship one innocent and clumsy step at a time.  The more experienced Lykainion is obviously enjoying the show. The scene is an excellent depiction of one sentence in the novel: “She followed Daphnis and Chloe, keeping close behind; and, 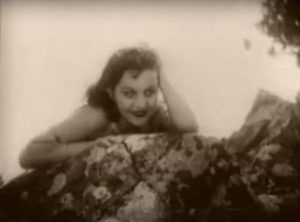 hiding in some bushes so as not to be seen, she heard everything they said and saw all they did.” This happens three-quarters into the novel, after the narration of all the games played by Daphnis and Chloe, including their attempt at sex. When we read this, Lykainion has been in the novel only for a few lines, but we realise, retroactively, that she’s been in the story for a while (“She saw Daphnis every day…”). It’s a little spooky, because up until that moment we thought we were the only ones with spying privileges, but now we find out that she was there with us, or perhaps we with her. No filmmaker could pass a peeping-Tom opportunity like this, and in fact Laskos anticipates Lykainion’s arrival and punctuates the games of Daphnis and Chloe with shots of her, to remind us that we’re watching them from her point of view. Of course she is a predator (the name means ‘she-wolf’) and will get what she wants (Daphnis), but it’s for the greater good of his learning what he and Chloe have been searching for. Laskos captures well her ambivalent participation in the story and invites us to reflect on ours. 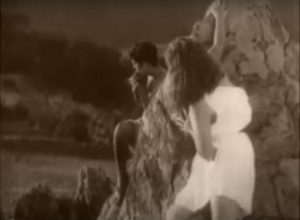 The film makes some spectacular self-sabotaging choices, number one of which has to be bringing forward the final recognition of Daphnis by his real parents, with obvious anticlimactic repercussions on the ending. But this allows a St. Sebastian-style torture scene which explores further one of the film’s main interests, namely the representation of bodies (it’s credited with the first nude in cinema and does an incredible job at rendering tactility). Another thing that the film does admirably is to convey the idea that nothing can seriously harm Daphnis and Chloe, not torture (quickly forgiven) and not Lykainion (a benefactor). I often see the world of Longus’ novel as a snow globe, minus the melancholia of actual snow globes: you can peer into it from different angles (‘the Lykainion look’ again) and enjoy the idyllic view, but you can’t go in, and it can’t come out. What goes on inside, the sexual awakening of the protagonists, is a sacred business carefully tended by the narrator, the gods, and nature herself, and while the culmination of the story is dramatic (“Chloe found out that what they had done in the woods had been nothing by shepherds’ games”), the loss of innocence could not have been narrated with more care. The film does not take us that far and ends with a reunion scene in a bucolic setting, but it contains a hint as to the future. Chloe watches Daphnis from behind a rock for a while, before surprising him (left). Maybe it’s her last game, or maybe she’s become a bit of a Lykainion herself. 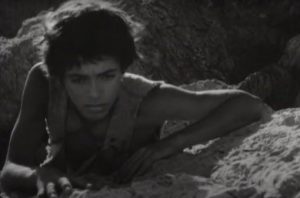 Nikos Koundouros’ Young Aphrodites (1963), by contrast, crashes the snow globe into the ground and makes sure you will never put the shattered pieces back together. It tells of the encounter between a group of nomadic shepherds and the community of women whose water and land they have come to share for a few days. The women’s husbands are fishermen currently out at sea, and the women put up a barrier as soon as the shepherds arrive. The rest of the story writes itself. It’s not a matter of if, but of how soon and how badly. Only two of the women dare to roam free (Arta, a young woman married to one of the fishermen, and the twelve year-old Chloe) and they attract the attention of three shepherds who are also at different points in life: Tsakalos, the man, Lykas, the teenager, and Skymnos, a few years younger than Lykas. At the heart of the film are the two parallel games of attraction and seduction, between Arta and Tsakalos, and between Chloe and Skymnos. Lykas, who has inherited Lykainion’s name and role, is in the middle, watching the boy and the girl (right), waiting for an opportunity which in the end, and painfully, will occur. Some of Longus’ images are developed to great effect. Daphnis’ bird traps, for example, laid out as an excuse to stay around Chloe’s house when he misses her, become Arta’s giant nets, which entrap her and Tsakalos as well as birds. Indeed, birds are the third element in between the two groups of humans, which belong to the land and the sea. Their sizes and destinies reflect the characters and their feelings: too big, too small, too trapped. 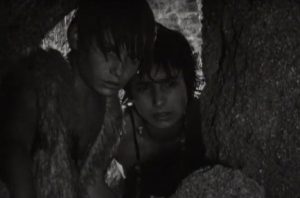 Young Aphrodites (terrible title) is spoken, but with only about 200 lines in 90 minutes you would have thought this the silent film and not Laskos’, which indulges in pretty hefty dialogue intertitles. Everything is conveyed through the filming of eyes and body movements, and one of the things that make the film exceptional are the games of Chloe and Skymnos in a rugged rocky landscape by the sea, a clearly liminal and symbolic location. There’s something about the rawness of their chases, the frustration of their stares, the hopelessness of their promises to one another, which is at the same time warming and tragic. Longus is nowhere near as effective at conveying the protagonists’ pains. They are the ones who carry the burden of all the different structural clashes and, too small and unguided, are crushed by it (their totem bird is a crucified pelican). A distorted version of the Lykainion look serves Koundouros well in playing out all of this. It is used to show the pair spy on Arta and Tsakalos having sex in a cave, looking at what may await them as well (left). But it’s a spectacle that scars them, offering no answer they can understand and instead throwing them into an unhappy confusion. It is also used to show Skymnos observing the excruciating rape of Chloe by Lykas (below). The difference between the shots of Lykainion and Skymnos sums up the different keys of the films as well as the viewers’ position. Young Aphrodite is an unforgiving, almost neorealist take on the story of Daphnis and Chloe, with no room for idealisation. It’s as if Koundouros wanted to test part of the plot against real life (as real as imagined 200BC Greece can be), and part of me wishes he hadn’t. 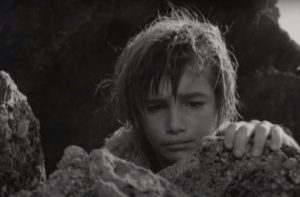