— This blog post was written by Dr Julie Van Pelt, postdoctoral fellow of the FWO. 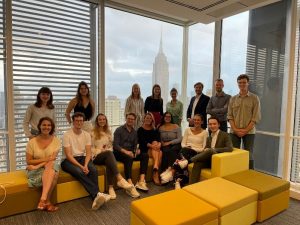 One of the main advantages of going abroad for research is the opportunity to travel and experience different cultures. A few weeks ago, during my appointment as a visiting scholar at Georgetown University in the US, I attended a Fulbright event hosted by the Flanders House in New York (see photo). I decided that I had to take advantage of the city’s recent post-pandemic reopening to attend a show at the legendary heart of the entertainment business. Excitement, bold colours, flashing lights, bustling crowds: Broadway! The actual show I found not that exciting, but that is beside the point: I could now proudly say that I had witnessed a paragon of American culture, and call it a day. While the idea of seeing a Broadway show had been raised as a self-evident New York activity, my interest in going was fuelled by memories of a specific movie: Birdman or (The Unexpected Virtue of Ignorance) (directed by Alejandro González Iñárritu, 2014).

The movie is, in fact, about a play. The near-forgotten Hollywood actor Riggan Thomson, whose career took flight with his role as the superhero Birdman in the eponymous blockbuster but now threatens to crash prematurely, is preparing a Broadway production in the hope of saving his reputation as a respected artist. What has always fascinated me about Birdman is that it deliberately blurs the distinction between reality and illusion. The medium of live performance particularly challenges this distinction. The movie offers a forceful reflection thereon, yet, as I came to learn during my doctoral research, it is something that was already felt by the Byzantines. 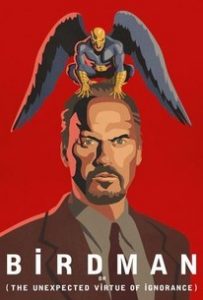 Birdman’s main vehicle for thematising the faded boundaries between reality and illusion is the protagonist himself. In the movie, it becomes evident that Riggan is struggling with some issues, which at times hinder his professional endeavour. The problem is that he identifies himself with his character, Birdman. He is plagued by delusions in which he, Riggan, Birdman, has supernatural abilities. Or are these not delusions at all, which exist only in his head, and is he truly an extraordinary person, yet no one can see his true value? Both options are deliberately presented as equally possible. There are various other ways in which the same blurriness regarding what is real and what is illusion comes to the fore in this movie, specifically in the context of the play that is being rehearsed. One of the actors featuring in it, Mike Shiner, owes his success on the stage to his strategy to keep it real while acting but turns out to be a shallow pretender in real life. For instance, he resorts to what may be called method acting and drinks on stage. Unable to engage in sincere connections with his co-actors off-stage, however, he is accused by one of them of being a ‘fraud’ in spite of his professional reputation as ‘Mr Truth’.

In Riggan’s case, reality and illusion are intertwined to such a degree that it is impossible to tell them apart. Mike, on the other hand, deliberately uses that ambiguity as a coping mechanism to be successful both on and off the stage, but, switching out reality for illusion, he loses his way too. Another character, one of the actresses in the play, has to deliver a monologue about pregnancy which becomes strangely meaningful to her ‘real’ self when she finds out that she is actually pregnant. The movie pushes the disorientation game even further: when, in one scene, Mike and Riggan walk down the street, their conversation is underscored with a jazzy tune, which at first appears to be a non-diegetic feature of the movie as filmic composition, but, when a street performer enters the shot, turns out to be a diegetic element ‘truly’ belonging to the story world. When the play finally premiers, Riggan shoots himself on stage with what was supposed to be a harmless weapon in the play’s dramatic closing scene. Rather than being abhorred by the spectacle, the long-feared and vicious New York Times critic praises it euphorically and calls it a new form of ‘super-realism’. The movie thus views the medium of live performance through a critical lens by thematising the ways in which it challenges the distinction of reality and illusion. It so happens that, perhaps without realizing it, the filmmaker has hereby reinvigorated some very old debates about the nature of performance.

Byzantium, though it is essentially the direct political and cultural continuation of Greco-Roman society which gave birth to the theatre, never developed a form of theatre of its own. Pagan theatre nevertheless continued to exist well into the Christian era, at least until the 6th century, and was especially popular in cities such as Antioch. However, the Church fathers tried very hard to dissuade the public from attending those spectacles. Among the reasons they disliked it were its ties to the pagan ritual calendar and the immoral contents of the plays, which very often staged adultery and other ‘sins’. However, if they had wanted to lure people away from those pagan spectacles, they might have tried offering them Christian entertainment or plays with a moralizing content instead, right? Those kinds of entertainment did appear, but only from the 10th century onwards, in the West. The Byzantine suspicion of the theatrical spectacle was rooted much deeper, not in the specific shape that late antique plays happened to take (although that was felt to be a problem too), but in the very medium of live performance. According to one Church Father, John Chrysostom, theatrical performances exert a corrupting force because of their ambiguous status: they are both real and not real at the same time. They are staged illusions, but as staged and embodied manifestations, those illusions become inseparable from reality. For instance, if an actor is weeping in order to convey sadness, his tears are real, even if the grief is not. Hence, for John Chrysostom, theatrical representations were thought to corrupt reality and affect the spectator negatively, because they have the power to ‘transform’ reality and infuse it with deception. Today, we may call theatrical representations ‘plays’, but for the Church fathers, they could never be ‘just’ games; they had very real and serious consequences.

The Christian hostility towards live performance was the point of departure for my doctoral research on early Byzantine hagiography. The danger that was felt to flow from the blurred borderline between reality and illusion seemed particularly relevant to me in the context of stories about saints who pretended to be someone they were not. One saint named Andrew pretended to be drunk in order to convince others that he was a lunatic and a fool, while he was in reality a most pious man. It appears the author may have been sensitive to the transformative power of illusions, since, out of all the possible methods Andrew could have chosen to be persuasive as a fool, he engaged in one that is characterized by a sharp distinction between the pretended illusion (intoxication) and the hidden truth (sobriety). While Mike Shiner in Birdman, by drinking on stage, tries to make the dividing line between reality and illusion as thin as possible in order to improve his acting, the fact that Andrew only pretends to be drunk helps to keep his real and pretended identities separate. Both make you wonder, nonetheless, about the truth. Is Mike more truthful, or is Andrew? It is surprisingly hard to say… Both characters thus remind us of how fragile something so seemingly self-evident as the truth really is. 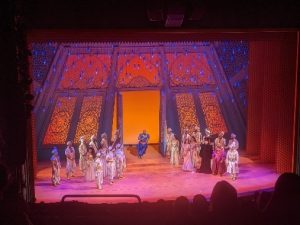 The year is drawing to a close and so is my adventure in the United States. One of the many things I have learned about this country is that it takes entertainment seriously and is therefore also very good at it. Broadway is one example. The thrill of a Broadway show lies in the high quality of the costumes, decors, and special effects, which are all aimed at transporting the audience to a different world, which looks surprisingly ‘real’. Broadway excels in false realness. If Church Fathers were hostile towards something like that, the modern public certainly enjoys it. At the same time, as much as the musical I saw (see the photo) was trying hard to make the scenes as realistic as possible, the fact that all the characters went through life singing and dancing was a reminder for me that this was not reality after all. Is this why I am not that into musical? Because, when the characters suddenly break out in song, it disrupts my engagement with the illusion? On the other hand, is not the paradoxical coexistence of a realistic presentation and an untruthful content – false realness – precisely what makes this and other forms of modern entertainment (movies, indeed) exciting? In musical, singing is perhaps a deliberate strategy to enhance the cognitive dissonance. It may be that Church Fathers underestimated the human capacity to be immersed into a presentation and to simultaneously maintain an awareness of its non-seriousness. Birdman offers an interesting experiment of what would happen if such a mental duality would prove to be untenable. At the same time, it also critically reflects on modern entertainment by asking how far the paradoxical coexistence of reality and illusion can be pushed before something cracks. Personally, I believe we need illusions. In our imagination, we can freely explore alternative realities, which, instead of fusing with the ‘real’ reality to form an epistemological hot mess, usually offer a foil for our interpretation of the latter. In that sense, Broadway may indeed be about more than entertainment alone.