— This blog post was written by Dr Mara Nicosia and Dr Simon Ford, both postgraduate researchers in the Novel Echoes project.

It was a dark and stormy afternoon in Ghent, as we sat in office 007 – masks on and windows dangerously opened, in the midst of the pandemic – and tried to make sense of a particularly irksome string of Syriac text, when we realized how fortunate we were to be able to share the experience of collaboration after more than a year of lockdown-related uncertainty and isolation. Although from different continents, we had both been trained in Semitic languages and well-schooled in the frustration of early-career academia. Then, “behold, there was light”, if not in the sky above Ghent, then in our understanding of the text and in our appreciation of our positions at Universiteit Gent.

Before being “brought to the light”, we did not know each other, but we were both piling up small projects and teaching to make ends meet, with a constant feeling of being underappreciated and unable to fulfill our research interests. Mara in Spain and Simon in the United Kingdom, we were struggling equally between the needs of the moment and our long-term research goals, which centered around the study of Syriac language and literature. First attested around the 2nd century CE, Syriac is the Aramaic dialect of the town of Edessa (modern Turkish city of Şanlıurfa), which was standardized into a literary and liturgical language and eventually turned into a major language used by some Christians throughout the Levant, Middle East, Central Asia, and India.

An ecclesiastical historian who had previously worked on the anti-Chalcedonian movement in the 6th century, Simon was hired to work on and coordinate a project on the representations of beauty and erotic desire in Late Antique hagiography as part of the ERC funded Novel Echoes project. Mara, on the other hand, has devoted the past few years to the study of Syriac rhetoric in comparison with Greek and Arabic traditions, and has been hired to study the Near and Middle Eastern echoes of the Greek novel in Syriac and Arabic literature. Together, we share the same copy of a Syriac dictionary (kindly provided by Simon) and an ever-growing list of possible purchases to submit to the library (which, like this blogpost, was written in collaboration in order to share the blame), as well as the feeling of being exceedingly lucky now to belong to a project which allows us to widen our interests and develop new research skills and strengths.

Since the beginning of our time in Ghent, we have realized that our existing skills and background knowledge made us compatible research buddies and at least one decent Syriac scholar (or two thirds of a very good one). For this reason, we have started working together, sketching out future publications and joint efforts. For instance, in the next couple of months, we will start re-analyzing and editing the Syriac fragment of Psedo-Nilus’ Narrationes, a text which was originally written in Greek probably around the beginning of the 5th century CE and which describes the martyrdom of a group of monks in the Sinaitic desert. 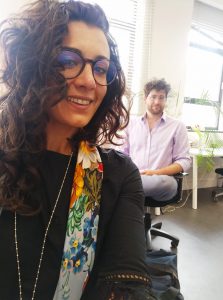