“The Greek novel is, in short, an epic of decadence which plays out easy procedures, exactly those that we see today on the screen, in order to stir emotions: oppositions of good and bad guys, of likable and of supporting characters; and procedures like storms and shipwrecks, and attacks by brigands and pirates, in order to plunge the good into misfortune.” I translate from Georges Dalmeyda’s 1926 French edition of Xenophon of Ephesos’ An Ephesian Story (1st-2nd century CE), one of the five extant Greek novels and often the loser of comparisons to any of the other four, not least for the syncopated rhythm of the narrative. I’m surprised less by his (then common) judgement on the decadence of the ancient novels than by his negative appraisal of the films of his time, since some watershed stuff was in the making: 1925 was the year of Eisenstein’s Battleship Potemkin, 1927 of Lang’s Metropolis, and in 1928 Buñuel and Dalí would start working on Un chien andalou, not very far from Dalmeyda. Also round the corner was film’s most momentous revolution: talking pictures. Swashbucklers aside (or perhaps included), the frontiers of the thirtysomething-year-old medium were constantly being pushed, and I believe that something similar can be said for Xenophon. Incidentally, what I have in mind is especially germane to film, so I’ll first turn to a contemporary of Dalmeyda who also picked up on the connections between novels and films.

Enter Sergei Eisenstein: director, theorist, mega film buff, and, as film buffs among you will know, god of montage. Tasked with making film the medium of the revolutionary working class, from the 1920s onwards he also wrote extensively about film. His essays and books give a good idea of the excitement around the achievements of contemporary film as well as the uncharted territories ahead. Eisenstein knew that in art as in nature nothing is created and everything is transformed, so he had no time for illusions of invention or originality: “It is always pleasing to recognize again and again the fact that our cinema is not altogether without parents and without pedigree, without the traditions and rich cultural heritage of the past epochs.” (232). He looked across media and cultures, absorbing like a sponge any idea that might improve film and get us closer to grasping its nature, from Japanese Kabuki theatre and ideograms to painting (he died when colour films were taking off) and poetry. Nowhere was he keener to acknowledge predecessors than with regards to montage, the technique that ultimately sent him to glory. Particularly famous is an essay of his from ’44 on parallel montage and its masters.[1]

Parallel montage is an editing technique that allows showing two (or more) different actions, happening (though not necessarily) at the same time in separate locations, cross-cutting between one and the other; nowadays it’s called ‘cross-cutting’ or ‘parallel editing’. It adds depth to the story by multiplying perspectives and also builds up tension concerning the connection of the two actions, including if and when they will become one. Now it may look like basic film language, but when it started being used it revolutionised the way in which films could tell stories. D. W. Griffith is credited with pioneering it in film,[2] but the roots of parallel montage are in literature, and Eisenstein’s ultimate model is in fact Charles Dickens. He quotes at length from Oliver Twist to show parallel montage at play to its full and almost cinematic effect. One reason Eisenstein was particularly proud of this ancestry is because he was convinced, not without reason, that films were in his time what Dickens’ novels had been in theirs.[3] We might argue equally that films were in Eisenstein’s time what the ancient novels were in theirs, for narrative techniques tend to be pretty old…

Enter Xenophon of Ephesos, ancient novelist, otherwise obscure figure, and a maverick of parallel montage. His An Ephesian Story, in five books, tells of the love of Anthia (belle) and Habrocomes (beau), their separation, and their adventures across the Mediterranean sea in order to be reunited. Parallel montage is functional to telling the couple’s separate tribulations throughout the first four books, but it’s in the final fifth that Xenophon really goes to town with it. Five separate actions are followed across five countries in Book Five (certainly a coincidence). The characters involved are Anthia, Habrocomes, Hippotoos (enemy turned helper), Leucon and Rhode (servants/helpers of A&H), and A&H’s parents. Their paths sometimes merge and then diverge across Egypt, Southern Italy, Sicily, Rhodes, and Ephesos, the tempo quickening in exhilarating ways towards the chaotic final reunion in the streets of Rhodes. What follows is an actual chapter in Book Five. The narrative is continuous, only segmented according to the different actions. Picture the changes of scenes. Also consider the reading time for each scene, double it, and pretend it’s film time.

“Hippothoos sailed over and landed in Sicily -not at Syracuse but at Tauromenion. He started looking for a way to support himself.

In Syracuse, now that a long time had passed, Habrocomes fell into depression and serious difficulty because he could neither find Anthia nor go back home. So he decided to take a boat from Sicily to Italy and travel up the peninsula. If he couldn’t find anything he was looking for, he would make an unlucky journey back to Ephesos.

By this point both their parents and everyone else in Ephesos were in deep sorrow because no message or letter had come from the couple. They sent search parties in all directions. Unable to hold out against despair and old age, both sets of parents had ended their lives.

While Habrocomes was taking his trip to Italy, Leucon and Rhode, the companions of Habrocomes and Anthia, decided to sail to Ephesos.”[4] 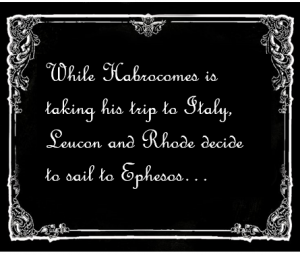 If this were a silent film, which in my mind it is, without changing much to the text, each of these sections could be the title card before the respective scene. Notice too the geographical red thread that connects the sections, each containing the location of the next one. My favourite cut is when the camera shows Ephesos in Habrocomes’ mind and moves seamlessly to the flashback on the parents therein. Some have ascribed so hectic a prose either to sloppy writing or the abridgement from an originally longer version, but I’ve asked Xenophon and he said no, it’s parallel montage. And indeed it’s the visual that helps readers navigate the cross-cutting. When Habrocomes’ action is resumed a little later (“Habrocomes, meanwhile, set sail from Sicily”), we find him in the same shot as his last one (the “take a boat from Sicily to Italy” from before). The same goes for Anthia. We see a shot of her in bed just before we cut to Habrocomes setting sail, and after a bit of him sailing and whining we come back to her, still in bed: “So he was lamenting and suffering from his labours. Meanwhile Anthia had a dream as she slept in Taras.”

When they emerged in the 1st century CE, films – I mean novels invented nearly nothing – even montage went back to the earliest Greek literature. The concept has no start date and can easily be seen everywhere if one wants to (this sentence, like the rest, was nothing but a montage of words). Similarly, when they emerged on the cusp between the 19th and 20th centuries, films borrowed narrative techniques that other media had been honing for millennia. Their application to the new medium must have felt familiar, but at the same time entirely new. I wonder if the readers of Xenophon, used to the long tradition of Greek literature but quite new to narrative prose fiction, felt something similar.

[2] Eisenstein both admired and condemned Griffith: “Among the most repellent elements of his films (and there are such) we see Griffith as an open apologist for racism, erecting a celluloid monument to the Ku Klux Klan.” (234)

[3] “What were the novels of Dickens for his contemporaries, for his readers? There is one answer: they bore the same relation to them that the film bears to the same strata in our time” (206.)