About seventy-five per cent of early silent films are lost, not least because of self-combustion, a spectacular defect of the cellulose nitrate (essentially, a bomb) with which they were made. I learnt this figure from Bill Morrison’s 2016 documentary Dawson City: Frozen Time.[1] Morrison tells the story of Dawson City (Yukon, Canada), the epicentre of the 1898 Klondike gold rush which started waning soon after, when more gold was found in Alaska. Its story is the story of those who made it, those who failed, those who left, those who stayed, and the few who really profited.[2] But what Morrison is really after is the story of the films that found their way to deep Yukon to entertain the Dawsonians. They arrived two or three years after the original release, had nowhere to go further West, and no one in the East needed them back. Dawson City became a cinematic cul-de-sac, and the silent films started piling up. Doom struck at the end of the 1920s for a number of reasons: the occasional fire, the arrival of the talkies, and most of all the lack of storage space. Tons of reels were thrown in the river Yukon and may still be floating somewhere, hundreds of films were burned, and a bunch of them were used to fill a swimming pool turned into an ice rink. These buried films were the lucky ones. 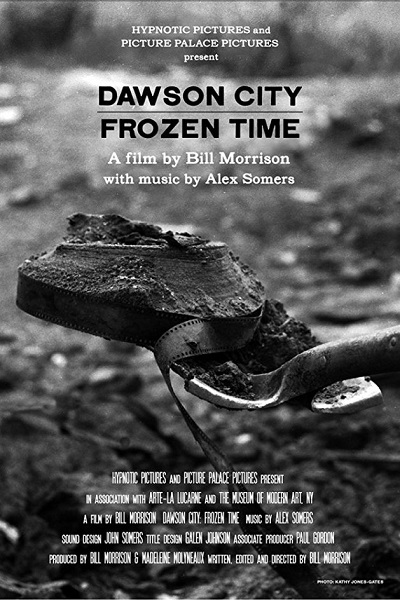 Films are either exposed to light or they don’t exist. Without light, their contents don’t materialize, and their memory is eventually lost. Come spring, the odd fragment of film would emerge from the ice rink, but it wasn’t until 1978 that an entire hoard was discovered during construction work. Light fell on the films (533 reels for 372 titles, almost all unique copies that don’t exist anywhere else) for the first time in 49 years, and people started remembering. It’s a story of love, loss, and resurrection that made my eyes a little watery more than once, but the real magic is in the filmmaking. Dawson City, mostly silent itself, is not just about once-lost silent films, it is made of them. Some of this is normal documentary work, like the story of the gold rush told through original footage. But Dawson City really flies when Morrison entrusts the storytelling almost entirely to the surviving films, which he has painstakingly segmented and rewoven, and connected by means of short captions. One such caption tells us that after 1921 the lucky bunch is stored first in the bank and then moved to the library’s basement: a sequence of shots of stairs, doors, door knobs, people behind doors, people spying, thieves. Whatever their original function in their respective stories, these shots now signify, collectively, preoccupation with the films’ destiny. Who says that one shot, one scene, can only live once, in one story? Another caption reads that eastern distributors authorize the destruction of the films: shot of a pirate throwing a treasure chest overboard. The films are moved from the library’s basement to be used as landfill: long sequence of shots of sad, inconsolable, and angry people. Who cares what worried these characters in the first place, now they’re all sad about the loss of the films they’re in! The forgotten films are reactivated to contemplate their own story in a continuous loop that ensures they’ll never be forgotten again. Dawson City is a Frankenstein of a film (but come to think of it, show me one that isn’t). It’s also born out of love. It doesn’t just tell the story of once-lost films; it gives them a second life.

It’s possible that around twenty per cent of ancient Greek novels (1st-4th century C.E.) survived in their entirety. Could be less; I don’t think it’s more. We don’t know why or when the rest were lost more than we know why or when the survivors were not. Whatever happened, Constantinople is one of the places where it happened. Having emerged in Asia Minor in the 1st century C.E., the novels didn’t have to travel far to get there. We don’t know if they travelled further East, but we know they started (or re-started) travelling West around the 12th century. Constantinople is the last known location of at least two lost novels as well as the place where the ones we have were secured for posterity. We also know that these novels were read because their titles and authors resurface in a handful of Byzantine texts, but it’s what happens below the surface that gives us a better idea of how novels were read and used. Buried in the pages of works of any kind, from history to funeral orations, lie fragments (a few words, sometimes a sentence) taken from novels written centuries before. This is not in itself unusual, literature of all times being a very Frankensteinian business, but it becomes important when it involves a genre that came close to extinction. Perhaps authors’ ability to create a memorable scene is key to their survival. 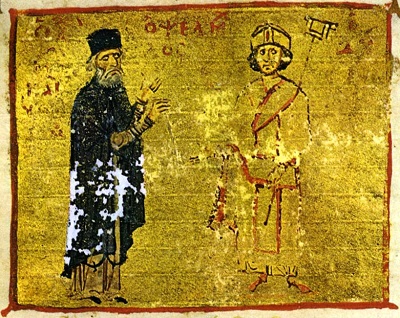 The most copied scene from Heliodorus’ Ethiopian Story  (4th century C.E.) is a bird’s-eye view of a beach at dawn: “The smile of daybreak was just beginning to brighten the sky, the sunlight to catch the hilltops, …”.[3] This scene was reused about ten times in a time span of a thousand years after it was composed. Placed conveniently at the very start of a long novel, it seems to have been an easy taking for anyone in need of a great shot of dawn. Those who read further also got more creative with the material they found and transformed it to their heart’s content, and I quite like it when people do that. Take Michael Psellus (see image) and his family drama (11th century).[4] Psellus describes himself crying by the tomb of his recently deceased sister, with his parents trying to drag him away. “Have pity on us!” his parents cry, “Have mercy of the grey hair that raised you!” Fast-forward to the moment when Psellus realizes that his father is going to die, and to a close-up of him “standing in incoherent horror”. If these reactions look a bit melodramatic for real-life events it’s because they are. There’s a scene in the Ethiopian Story where one Cnemon dashes into his stepmother’s bedroom, sword in hand, to catch her and her lover in the act when… surprise! The lover is no other than his dad, who’s now begging: “Have pity on your father! Have mercy of the grey hair that raised you!” Cnemon is reasonably shocked (he’s been tricked by the stepmother, whose advances he has scorned), a feeling captured in a close-up of him “standing in incoherent horror”. And so we can see that Psellus has segmented a scene of desire and betrayal (and a certain amount of irony) in the Ethiopian Story, and re-montaged it for two different and very personal moments of his life. Did these moments really happen? Or did he see himself a little bit like Cnemon (minus the quasi-Oedipal aspects, one thinks)? Maybe he just wanted to feel like his life belonged in a novel, like the one he’d read and loved.

One century later, Nicetas Choniates uses a similar montage trick when describing warriors from Scythia (roughly between the Black and Caspian Seas).[5] We see them like we see the bandits in Kurosawa’s Seven Samurai: “They’re great fighters: brigandage is a way of life to them, and they hold death in all its forms in contempt”. Their special move also belongs in a film: “They would take to their heels and outrun the enemies by some margin, though even as they ran they would shoot arrows backwards over their shoulders”. Impressive, but these aren’t Scythians at all, or, to put it better, they are now, after reincarnation. In their previous lives in the Ethiopian Story, eight hundred years before, the first scene was created for a description of brigands from Northern Egypt, and the second of warriors from the Land of Cinnamon (modern Somalia). Choniates combines in one continuous sequence what were originally two distinct shots about completely different people. But does it matter if actual Scythians used to perform the run-and-shoot? Isn’t a little liberty with accuracy a reasonable price to pay for a shot worthy of John Ford? 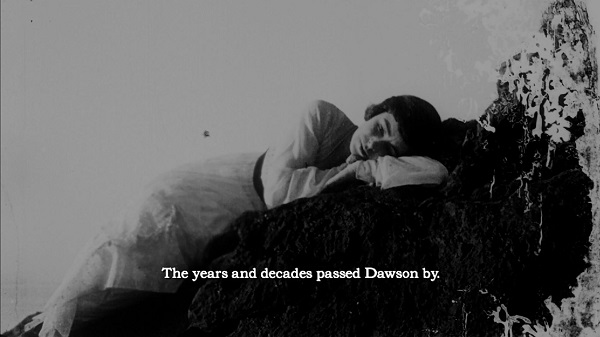 You can recognize the century-old films in Dawson City immediately. They’re in black and white, silent, blurry, shaky. And they’re fragile, with white scratches running through them like little veins, and full of holes. Next to them the aerial shot of present-day Dawson City, the camera embracing river and land to show exactly what it means to build a city where there wasn’t one before, looks like a space shuttle next to a wheelbarrow. That’s the point of Dawson City, to juxtapose old and new and make you think about time and memory. How quickly cinema ages, I’ve also thought. It’s a little older than one century and its beginnings already look ancient. Not so Greek prose of the first millennium. The words of Heliodorus and those of Psellus and Choniates many centuries later are made of the same stuff, which means the scenes from the novel blend into their surroundings without a glitch. In fact, whenever I spot one of them, I feel like I’ve seen through perfect camouflage. But maybe I’m wrong and these authors never intended to hide anything. Maybe the readers in Constantinople saw through the montage of old and new and drew a lot of pleasure from it. And I wonder, if we can recognize these scenes because we have the original to compare them to, how many scenes from lost novels are also there, undistinguishable from the rest but still floating somewhere?

[2] Not far from Dawson City, in Whitehorse, one Frederick Trump built a brothel and made a fortune (paternal grandfather, in case you’re wondering).

[3] John R. Morgan’s translation of the Ethiopian Story, the source of all my quotes in this piece, can be found in B. P. Reardon’s Collected Ancient Greek Novels.

[4] Michael Psellus was a literary, political, and religious factotum. The following scenes are taken from Encomium for his mother.

[5] Nicetas Choniates was a historian. This scene is taken from his Orations (2).